of the "Buxtehude Bull"

After running my bookstore in Buxtehude for a few months in 1970 – coming from Berlin – I decided to create a youth book award, in which an equal number of young and adult readers would decide who should receive the annual prize. Anyone who was willing to spend time with new publications on the youth book market could have a chance to be on the jury.

The only thing needed was a little “luck of the draw”, in the case that there were more applications than places on the jury. This solved half of the problem. The other half was finding a name, respectively a symbolic figure for this youth book award. It was clear to me that Buxtehude, as my new home-town, should be included in the name of the award. 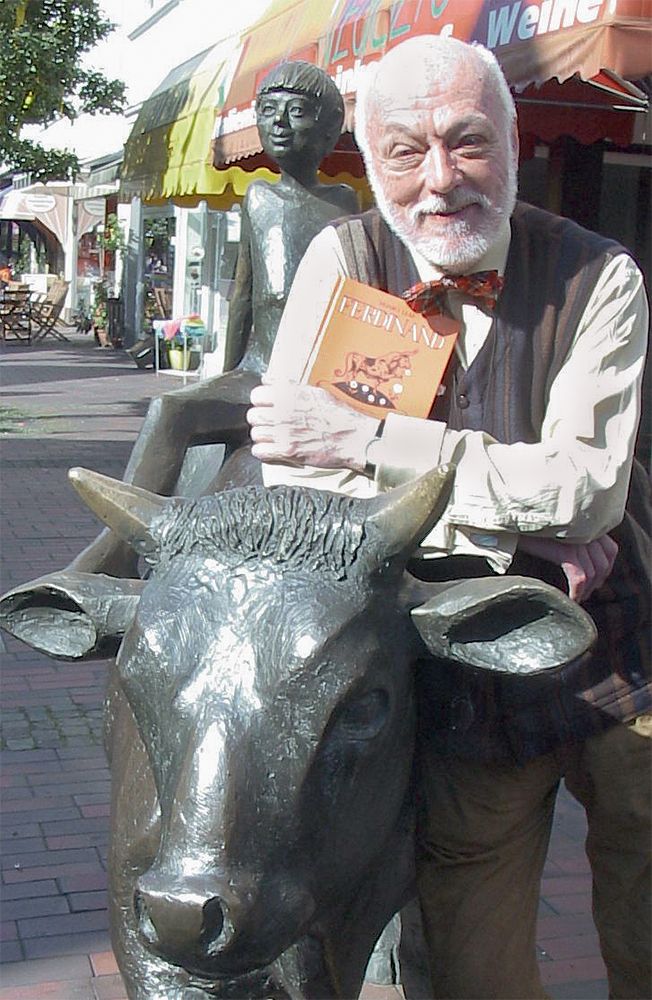 I decided to find a solution with the help of alliteration. During this search, I came across a picture book I have known and loved for many years by the American writer, Munro Leaf called "The Story of Ferdinand". It was first published in 1937 and the German translation is still available under the name "Ferdinand". It has even been made into a movie.

This is the story of a young bull that refuses to act as a bull should in the bull fights of Madrid's bull-fighting arenas, even though he is the strongest of his age group. Because of this, the picadors bring him back to his green meadow.

Ferdinand, strong and peaceful, seemed to be a good symbolic figure for a youth book award that wanted to go down a different path than awards have previously gone. So, the award was named "Buxtehude Bull".

There have been several comical mix-ups in over twenty years of the "Bull's" history. One media report ran a story about the "Golden Buxtehude Bull" award. But all this could not prevent the "Bull" becoming known and accepted as the symbolic figure it still is today.

I was fortunate, when procuring a statue as award for the winner of the "Bull", to meet a young sculptor, Reinhard Güthling, whose work I had seen in an exhibition. I asked whether he would be willing to make an initial series of ten statues - showing a peaceful bull.

He offered me two options. One very realistic, of which I still have one even today, and one more abstract version which I chose in the end, which he then produced ten-fold.

In the meantime, I had seven further statues made. Reinhard Güthling, married to a woman from Chile, had emigrated to Chile, but returned to Germany some time later due to the political development there.

I met him by coincidence and, because the "Bulls" were running low, I asked him whether he would be able to produce a further series of “Bulls”. He agreed, provided that he would be able to find the same steel somewhere on the scrap market that he used to make the original body of the "Bull". The scrap steel parts were previously frames for shop windows.

A few days later he called me saying that he had been able to find this type of steel and thus would be able to produce further "Bulls".

I gave him the order and therefore we are today, after many years, still able to award every author an original “Buxtehude Bull” as a prize.

passed away, due to serious illness, on the 16th November 2010 at the age of 76. The Buxtehude Bull’s creator, and constant companion, strongly influenced Buxtehude’s cultural life with this nationally recognized youth literature prize.