Buxtehude. The US author, Amy Giles, has been honoured with the renowned German Youth Literature Prize: The Buxtehude Bull, for her book “Now is Everything” (translated from English by the Hamburg author, Isabel Abedi, cbj Verlag in Munich). A jury comprised of eleven youths and eleven adults held a majority vote for the author. The award is endowed with €5000 and a steel-plastic sculpture in the shaped of a bull. The official award ceremony is tentatively planned for the end of the year.

In a public award decision event, the winning votes were counted and the winning title was made known last Tuesday evening, at around 9pm in the presence of Buxtehude’s mayor, Katja Oldenburg-Schmidt.

Dead silence in the Sieglitzhaus, Buxtehude Germany. Only every now and then a whispered “yes!” or if the “wrong” book got a point…“No!”. Tuesday evening the public award decision was made for the Buxtehude Bull 2018…for the 48th time.

Buxtehude’s mayor, Katja Oldenburg-Schmid,t greeted the audience. Precisely in our digital age, it is especially important to honour books, she said, and then proceeded to thank the sponsors – namely the Library’s Support Society. Each juror was called onto stage to receive their applause.

Ms Ulrike Mensching, Head of the Buxtehude Library, spoke of “the most exciting evening of the year in Buxtehude”. From approximately 90 new youth books in 2018 in the longlist, 7 made it to the shortlist. All are “real winners”, according to Ms Mensching. The Jury was said to be especially critical this year. It took some time until we could see which books would make the shortlist.

A group from Palastina, “Nablus Circus School” entertained the audience. The student-developed project is not just about circus performance, but rather to aide traumatized children. Group leader, Mohammed Shaffe, said that the group has performed in front of 15000 people. As the project is still quite new, support from the participating youths’ families is still difficult. In some places, Jerusalem for example, the group were not permitted to perform.

Each book was presented to the audience, whom could also vote for which book they thought should win the Buxtehude Bull – however this was not part of the offical voting. The audience could see how the votes fell by way of bar chart. Both times, from the youth jury and the adult jury, Amy Giles was in the lead. 2nd place was awarded to “Thalamus” by Ursula Pznanski, 3rd place to “The Serpent King” by Jeff Zentner.

Author, Isabel Abedi, who translated the winning title into German, and also shortlisted, was a guest in Buxtehude. “I’m speechless. I would never have thought it and am so happy for Amy”, Abedi said. It was also a debut for her: her first translation. Amy Giles could be reached via telephone on Tuesday evening. She was very delighted about the award. The exact date for the award ceremony is not yet decided.

Be the best. And if need be, be invisible. With this credo, Hadley McCauley has learnt how to live within her family. Perfect pupil, perfect athlete, perfect daughter: That’s the only way to keep her father happy. Because the behind the McCauley family’s spotless front lies an ugly secret. Hadley will do anything to protect her little sister, Lila, from their unpredictable father. Then Charlie Simmons walks into her life and a desperate, intensive relationship develops between them. And the violence at home escalates along with it … 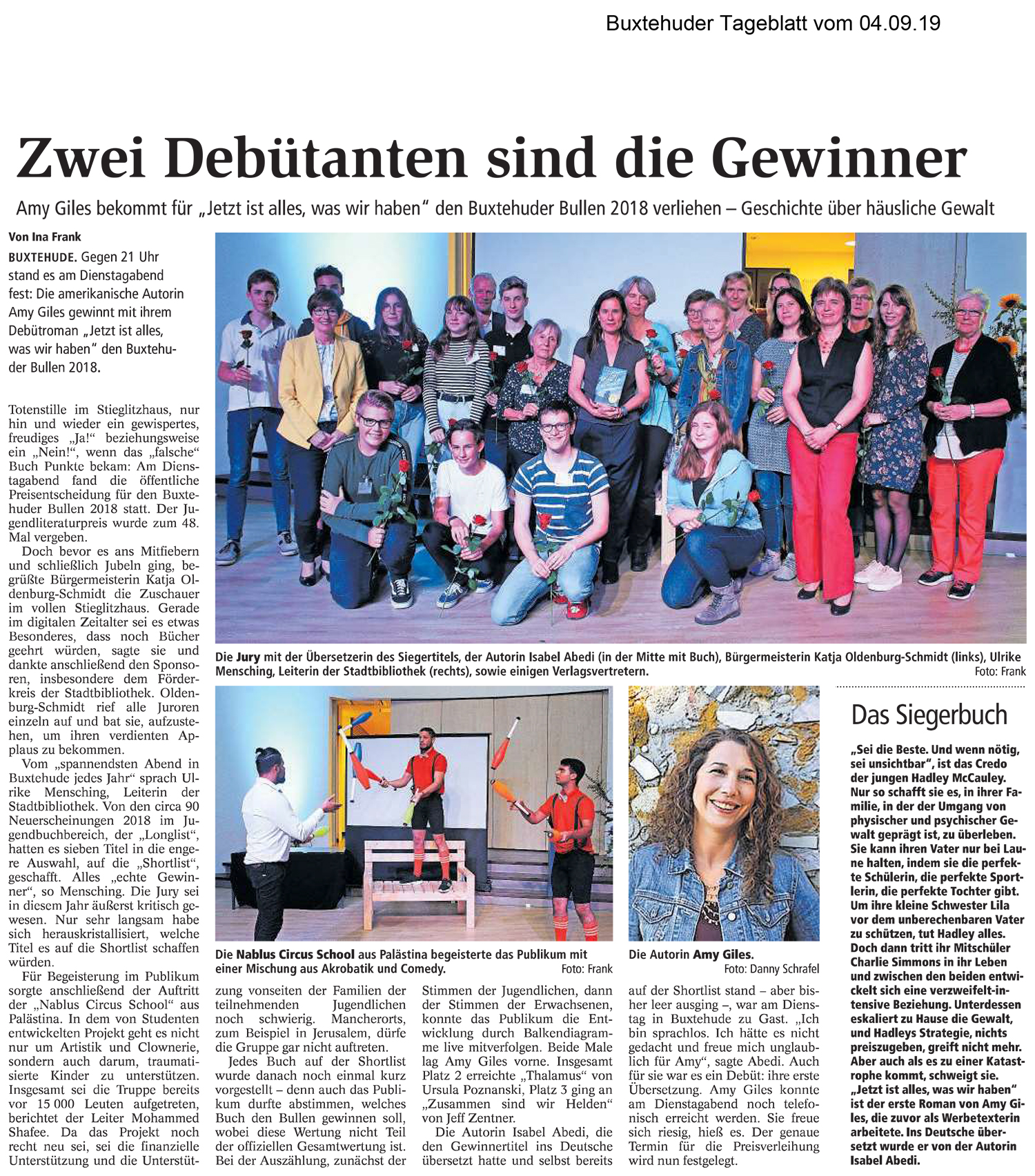