Buxtehude. Victoria Aveyard received the youth literature prize, “Buxtehude Bull”, on Tuesday evening, 16th October 2018. The 22-seat jury awarded the American author for her 2015 fantasy novel, “The Red Queen”, volume 1 from the series “The Color of Blood” (Carlsen Publishers) in the year before last (2016). As the author was writing the fourth volume of her novel series back then, she could not collect the €5000 endowed prize personally. However, now she has made up for that.

Buxtehude's mayor, Katja Oldenburg-Schmidt, presented the “Bull” steel statue to the beaming author. “As so many youths were allowed to make the co-decision, it makes this prize's meaning all the more special to me”, the 28-year-old said. After she found out that she had won the “Buxtehude Bull”, she looked through the list of prize-winners to date: “There are many authors among them, whom I looked up to in my youth. Now I am one of them. Wow!”. 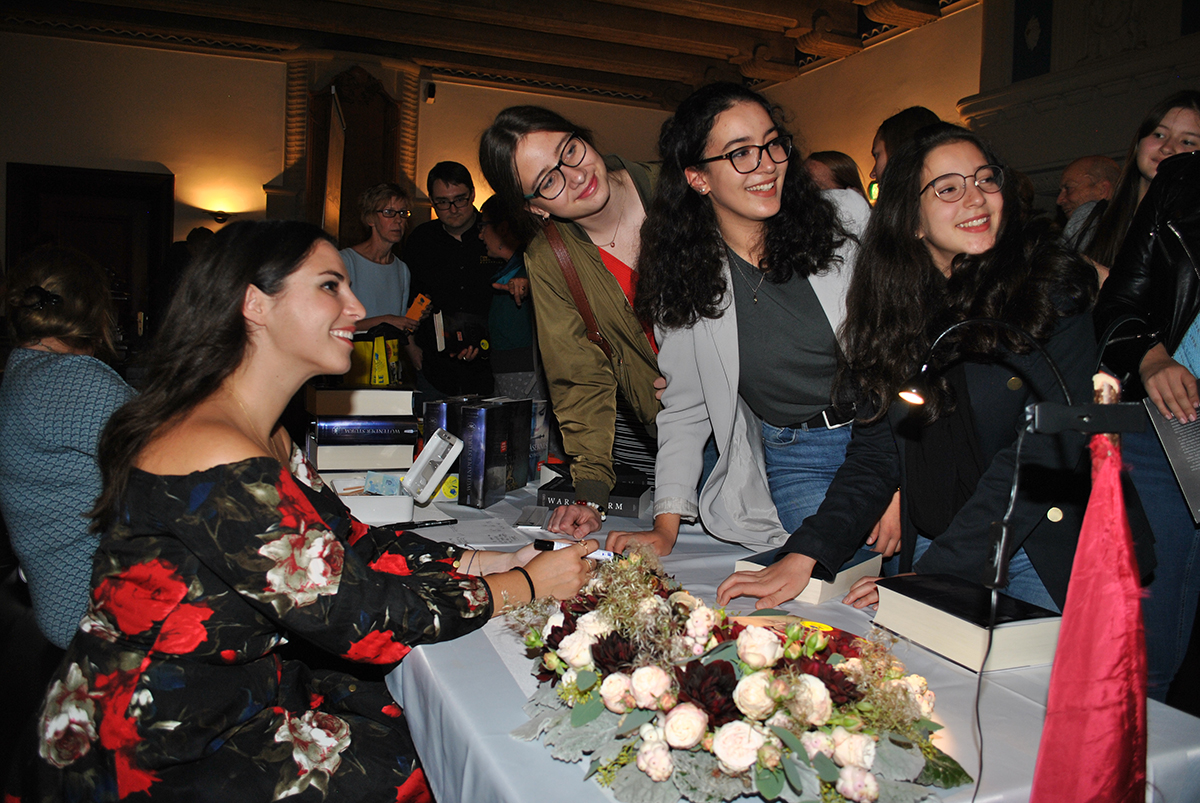 To kick off the official award ceremony, the Buxtehude actress, Celia Hoffmann, presented a monologue from the protagonist, Mare Barrow. She impressively portrayed the conflict in which the 17 year old main character finds herself in. Although Mare, with her red blood, belongs to the under-class, she possesses the magical powers of the upper-class: The youths want to free themselves from oppression. Hoffmann: “Sparks can ignite a fire!” And that is exactly what the actress successfully did. Celia Hoffmann masterfully introduced us to the emotional impact of this debut novel.

Aveyard was accompanied by her publishers: Katrin Hogrebe and Britte Kälble of Carslen Verlag together with the book's translator, Birgit Schmitz - all of whom travelled to Buxtehude for the prize ceremony. The evening was lead by the Buxtehude's Head of Culture, Tourism and Marketing, Torsten Lange, with musical accompaniment by duet, JazzPuls – Ralf Böcker (saxophone) and Philipp Starske (guitar). Lisa Garrn translated the German-dominated ceremony into English.

Early that afternoon, Vicotria Aveyard enjoyed the sight of her “BULLevard” plaque, which is embedded into the pavement within Buxtehude's old town center. She was especially happy to see that the plaque was placed directly in front of a book store (Schwarz auf Weiß - “Black on White”): “One day I will check to see if this plaque is still here. I will come back again, when no one expects.”