Youth Literature: John Boyne is the new Winner of the Bull

In front of an audience of around 600, on the Buxtehude Halepaghen Stage, he thanked the city, the jury and especially the readers for this “pat on the back”. Boyne was honoured for his youth novel, “The Boy on the Top of the Mountain”, published by Fischer-Verlag (German publisher) and translated into German by Ilse Layer.

Building Bridges Between the Generations
Lautatory presenter, David Safier, who was honoured the Buxtehude Bull award himself in 2014, praised the book as “emotionally real”: “With your work, you, dear John Boyne, heal the wounds that are inherited from generation to generation.”. The novel tells the story of Pierrot, the son of a French mother and a German father, who loses his parents and is taken in by his aunt, who serves as a maid, to a German household: the “Berghof” – Adolf Hitler’s summer residence. Very soon, the boy is under the direct influence of the “Führer”.

Safier emphasised how important it is to remember the Holocaust, “in these times, where the witnesses of the day are slowing passing away – victims, offenders and followers – we storytellers are called upon to build the bridges between the generations.” And in this, Boyne is admirably successful in done so.

Buxtehude’s mayor, Katja Oldenburg-Schmidt especially paid tribute to the respect for youth jury’s – who chose John Boyne as their favourite pick”. It moves me so much that especially the youths chose this book and this topic. It goes to show that this topic has not lost any of its meaning and topicality with the young generation. This is so encouraging!”.

Boyne feels award is a special honour
John Boyne emphasized that the Buxtehude Bull has a special meaning for him alone because he was chosen by a readers’ jury: “Eleven youths and eleven adults, that is unique; that is a special honour.” This honour has shown him that his approach in showing how events are seen from a child’s perspective in Nazi Germany is so well acknowledged, how the fact that his main character turns from an innocent child to an offender himself.

Youths bring the world of protagonist, Pierrot/Peter, to the stage
The topic of indoctrination, temptation and submission in a totalitarian regime was captured through a group of about fifteen students from the Buxtehude grammar school, Gymnasium Süd, under the instruction of the Horneburg actor, Rainer Piwek. After a key scene - read offstage – the audience was led into the book’s topic as the youths took up the book’s themes. They danced, acted out implied confrontations and sang. Without a spoken word, the troop were successful in creating a dense atmosphere. The ceremony was musically accompanied by the Krerismusikschule (music school) Stade’s “4-Beat” big band. Martin Kummerow hosted the evening.

Contact between author and readers at book signing
Following the award ceremony, John Boyne wanted to get in touch with his readers. He got talking to his fans during a book signing session. Although Boyne – who regards himself as a very disciplined author – explains he would be very unhappy if he didn’t have his writing work, he is glad: “Writing is very lonely, a pat on the back from happy readers feels good.” 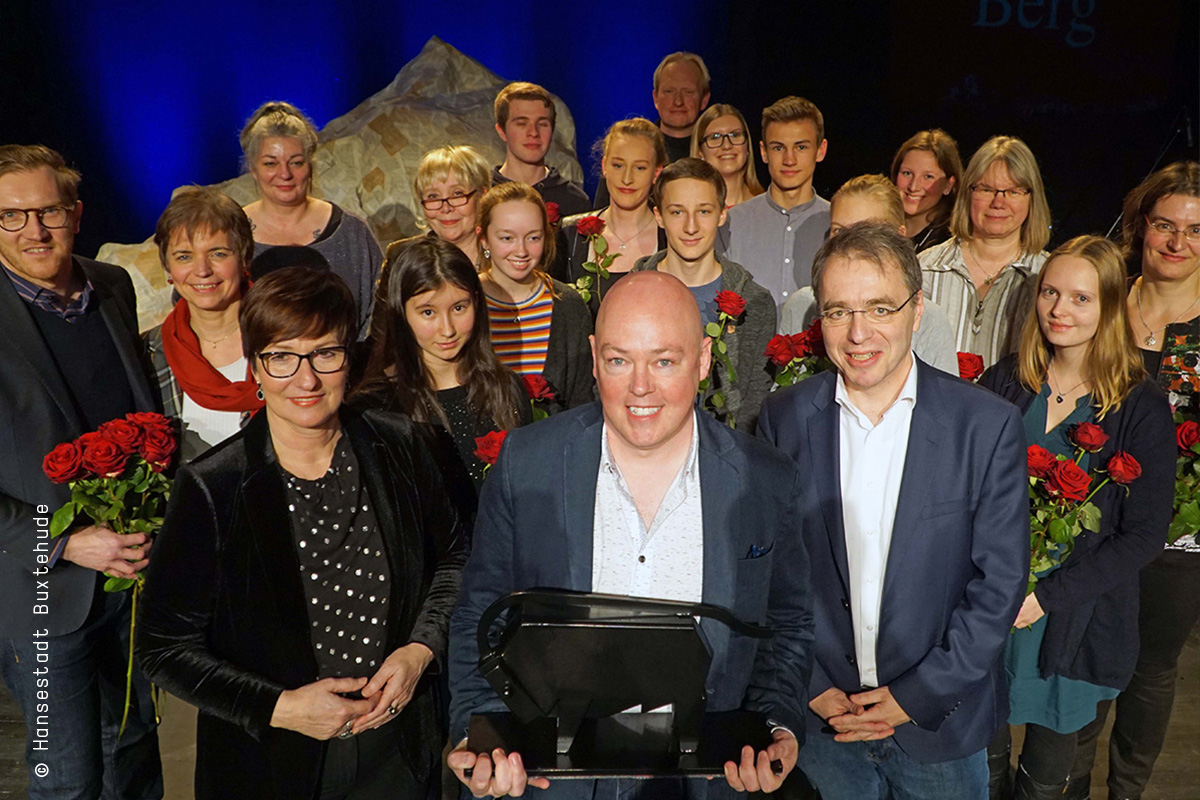 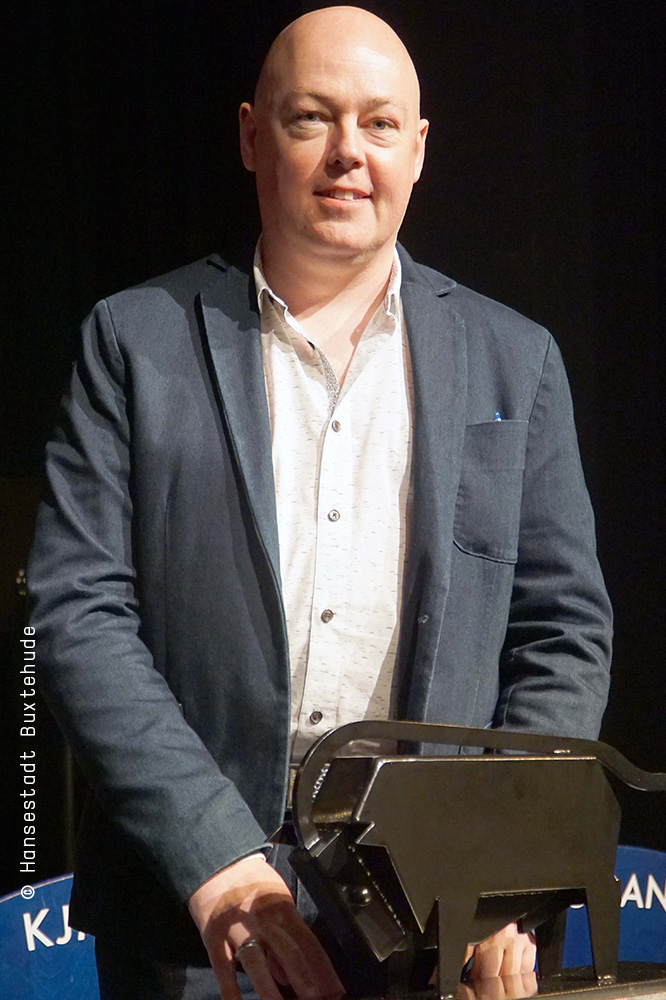 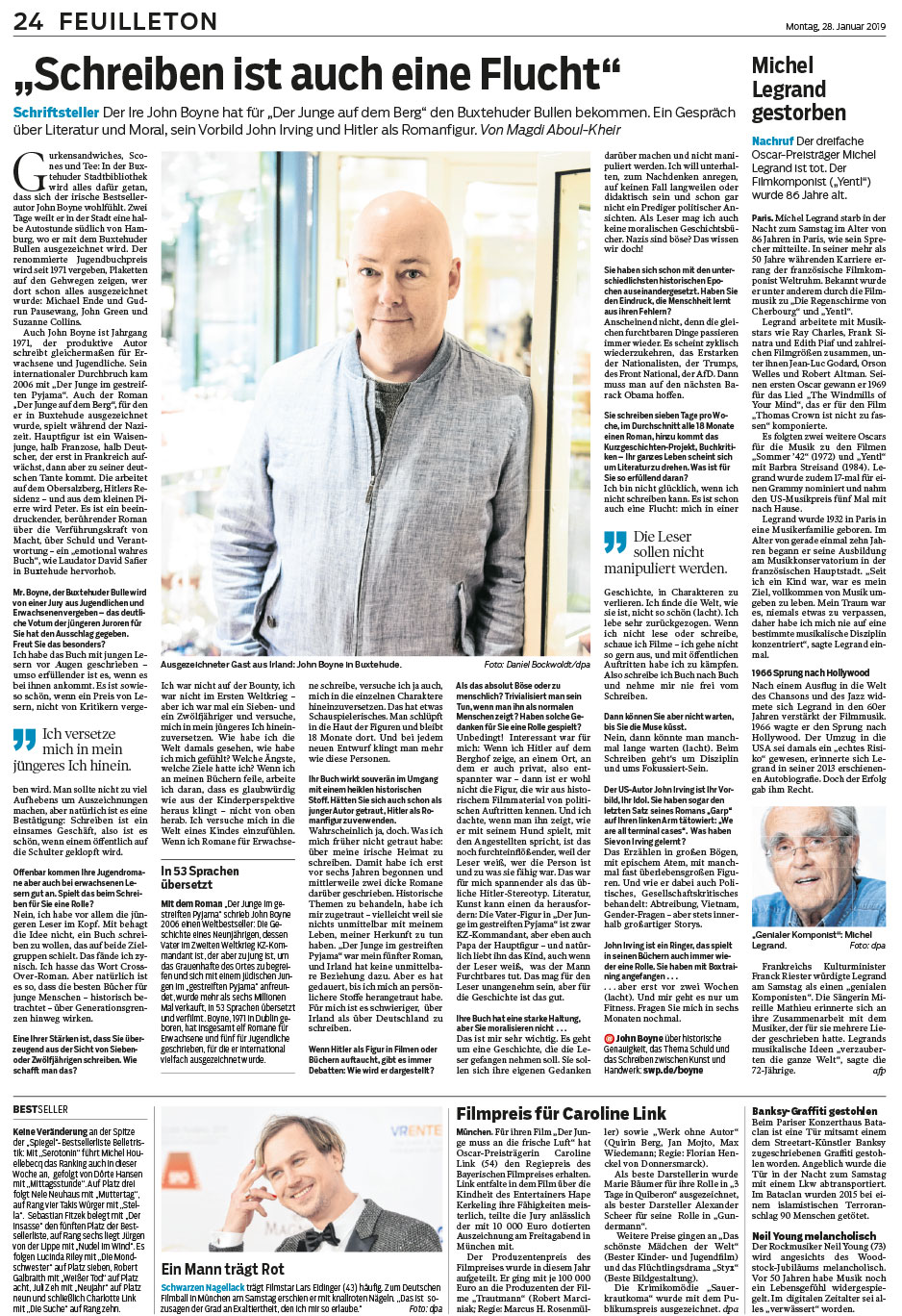