Buxtehude. “I can hardly believe it, I am so overwhelmed!  I am standing here all because of you”. It was with these words, that the American author, Tamara Ireland Stone, received the remunerated €5000 “Buxtehude Bull” Youth Literature Award from mayor Katja Oldenburg-Schmidt's hands last Friday evening. The Frankfurt-born (1969) author was honoured by an audience of some 500 at the Buxtehude Halepaghen Stage for her youth novel “Every Last Word” (German Title:“Mit anderen Worten: ich”). Magellan Publishing was there to represent the German book translators, Sandra Knuffinke and Jessika Komina. 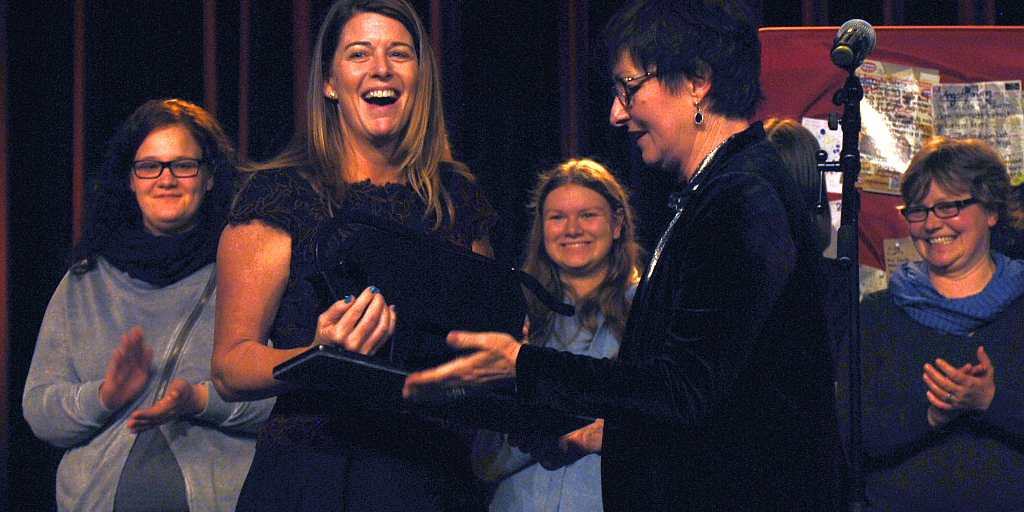 “We are fascinated, inspired, touched and moved.”
The Laudators, Buxtehude Pastor, Lutz Tietje (St. Paul's parish) and his wife, specialist for child and youth psychiatry and psychotherapy, Dr. Maren Tietje, praised the book's spirit: “You, dear Tamara, allow us to feel the power of words and to experience what it is like for an “I” to search for, and find, oneself. We are fascinated, inspired, touched and moved.”

Buxtehude's mayor, Ms Katja Oldenburg-Schmidt, emphasized the special meaning of literature and the power of language: “Words can console, but they can also be deeply hurtful.” Through her novel, Tamara Ireland Stone has managed to win her readers over.  Moreover, “Tamara, you have enchanted Buxtehude.”

US author calls the award “a very special honour”
Tamara Ireland Stone was deeply touched, saying, “To get this award is an unbelievable honour. As an author, you hope that the world that you create influences the readers you have. This award shows me that I have obviously been able to touch others.”

The book's protagonist is Samantha.  The teenager painstakingly hides, from fear of being labelled crazy, her obsessive compulsive disorder. Words are not Samantha's friends. On the contrary, endless chains of thoughts plague Sam and stop her from leading a carefree life. However, her life is changed when she meets Caroline. Caroline sees through Sam's façade and invites her into a secret poetry club. This is where, for the first time, Sam experiences the freeing power of words and edges closer to who she is.

Slammers demonstrate the power of words on stage
The celebrated award ceremony's presenters, Sven Kamin and his colleague, Tabea Farnbacher – both two of the most successful slammers in Northern Germany – explored the book's theme “the emotional world of youths and the power of words”. They shaped the stage's program. Tabea Farnbacher requested the audience to close their eyes, sat down on the stage's floor and began her slam “Black Out”, whereas Sven Kamin fired off, with full mind and body strength, his “Poem of Terror” at the audience as well as an imagined dialogue with the “Old Masters” -  Johann Wolfgang Goethe, Franz Kafka and even Hermann Hesse.

In the style of the novel's secret poet's club, Kamin and Farnbacher, together with the “Buxtehude Poet's Club” - with its six Buxtehude slammers – interpreted, each in their own way, a marked scene within the book. The evening's program was rounded off with musical accompaniment by Guido Jäger and Angel García Arnés.

On the preceding afternoon, the 46th Buxtehude “BULLEvard” plaque – a brass plaque with the winner's name and book title – was unveiled by Tamara Ireland Stone and Buxtehude's mayor, Katja Oldenburg-Schmidt. Tamara Ireland Stone was already very touched back in August, by the jury's decision announcement. “I was so shocked and surprised. And I am now so thankful for this unbelievable honour.” Tamara Ireland Stone was so happy about how warmly her and her father, Bill, were welcomed to Buxtehude. “We came as foreigners and leave as friends – if we leave at all, that is.”

About the Prize
The Buxtehude Bull is one of the most remunerated and tradition-steeped German literature prizes. In 1971, it was initiated by the Buxtehude book dealer, Winfried Ziemann. The prize is endowed with €5000 and the Buxtehude Bull's aim is to inspire youth's to read as well as to encourage the spread of good youth literature. For over 40 years, through the jury's traditional combination of equal numbers of eleven youths and eleven adults, it has been this prize that comprises the interface between literary quality and literary preference with the themes that collectively move youths and literary experts. Through it's aims and it's processes, this prize is unique in the German-speaking world.

Buxtehude BULLEvard
The winners are immortalized within the Buxtehude town-scape by way of brass plaques. To date, the BULLEvard – the winners' “Walk of Fame” - over 40 plaques have been laid all over the town. Among them, the authors: Christine Fehér, Lauren Oliver, Jostein Gaarder, Stephenie Meyer and David Safier.