The "Buxtehude Bull" has been "the symbol of reading" for over 50 years, according to Mayor Katja Oldenburg-Schmidt in her welcome address. The award-winning titles should, in the spirit of the award initiator Winfried Ziemann, inspire enthusiasm for young people's literature. The jury's decision in September already showed how well Sølvsten managed to do this with her debut. With the fifth-highest score in the history of the “Bull”, the fantasy title “Ansuz”, with its 800 pages, clearly prevailed among the jury’s eleven youths and eleven adults. It is likely no coincidence that the fantasy genre in particular is so popular in these times, Oldenburg-Schmidt continued.

Oldenburg-Schmidt was not concerned about the reading pleasure of the around 350 guests in the hall, and presented the Copenhagen-based and trained economist, who only found writing a few years ago, with the twelve-kilogram steel bull sculpture. The award also comes with award money of 5 000 euros.

"Ansuz" - a book of teamwork

"I would like to thank my publisher, Arctis, for this wonderful evening, for the music, the dance performance, and above all my translators, who did a great job. And I'm impressed by the jury, who all read the book. And in general: Thank you very much, Buxtehude – the nicest people who live here.”

Sølven's "Ansuz" is not entirely unjustly nicknamed "raven tome," according to one of its translators, Justus Carl, in his laudatory speech. The author "brings the world of legends into today's modern world and combines these myths with something else that is typically Nordic or Scandinavian, namely an exciting crime story." However, "Ansuz" is about much more, according to Carl: "( ...) than mysterious murders and the mythological struggle between good and evil. It's about growing up, discovering your strengths and weaknesses, figuring out where you belong, about love and one of the most important things of all, friendship.”

The two translators, Justus Carl, and Franziska Hüther, had particular fun with the main character Anne, despite the time pressure of only four months, they revealed to moderator and self-confessed "Ansuz" fan, Anne Sauer, in an interview. It was "a real pleasure to find and invent German equivalents for all sorts of insults and snide comments," said Carl. The work and performance of translators and translations is rightly becoming more and more important, added Hüther.

On the Scandinavian-styled Halepaghen stage, in the interplay of light and shadow, the dancers, together with their choreographer, Fiona Zander, managed to "dance" the fantasy material impressively, as moderator Anne Sauer put it. Sometimes floating, sometimes powerful, to sounds reminiscent of great film scores from "Game of Thrones" and "Lord of the Rings".

The spherically light music of the sister duo, JOCO, from Hamburg, took the audience, with its indie pop, on a journey to the Nordic coasts, to bright midsummer evenings and full moon nights.

"BULLevard" in front of the Buxtehude Museum

The entire city is celebrating the “Bull” and its winning author over the next few days: Today, Friday, November 11th, after school-readings in the morning, the unveiling of her star on Buxtehude’s “BULLevard” is on the agenda. At 3:30p.m. the brass plate, bearing her name, will be unveiled in front of the Buxtehude Museum (St.-Petri-Platz) together with Buxtehude's Mayor Katja Oldenburg-Schmidt. Another opportunity to experience the author is from 7pm at “An evening with Malene Sølvsten” in the Buxtehude City Library, Fischerstraße 2 in Buxtehude. Remaining tickets are available at the box office.

Seventeen-year-old Anne can see events in the past, and one night she has a vision of an old gruesome murder. A red-haired girl is killed, and the perpetrator leaves the mark of a rune on her body. Shortly thereafter, red-haired girls are actually found dead within the area, all with the same mark, the rune Ansuz. Suddenly, the small town in North Jutland, Denmark is full of strangers with mystical powers. The Aesir believer, Luna, the divinely beautiful Mathias and the mysterious Varnar seek closeness to Anne. But who is her friend and who her enemy? To save the world from Ragnarok, Anne must find the killer - before he finds her.

Malene Sølvsten, born in 1977, made her debut in 2016 with the first volume of the fantasy trilogy, Whisper of the Ravens. The series quickly became a surprise hit and bestseller in Denmark. The trained economist worked for the Danish Ministry of Finance for a long time, is now a full-time author and loves going to museums, books, art, and all kinds of knowledge. She lives with her family in Copenhagen.

The Buxtehude Bull is one of the most renowned and traditional German literary awards. It was initiated in 1971 by the Buxtehude bookseller Winfried Ziemann. The award is endowed with 5 000 euros. The aim of the Buxtehude Bull is to inspire young people to read and to promote the distribution of good books for young people. Due to the traditionally equal composition of the jury of eleven youths and eleven adults, the award has successfully formed the interface between literary quality, youth’s reading preferences and topics that move both young people and literary experts for more than 50 years. In terms of its objectives and its procedure, the award is unique in the German-speaking world.

(1)Unofficial translated title only.  Anzus is not yet officially translated into English 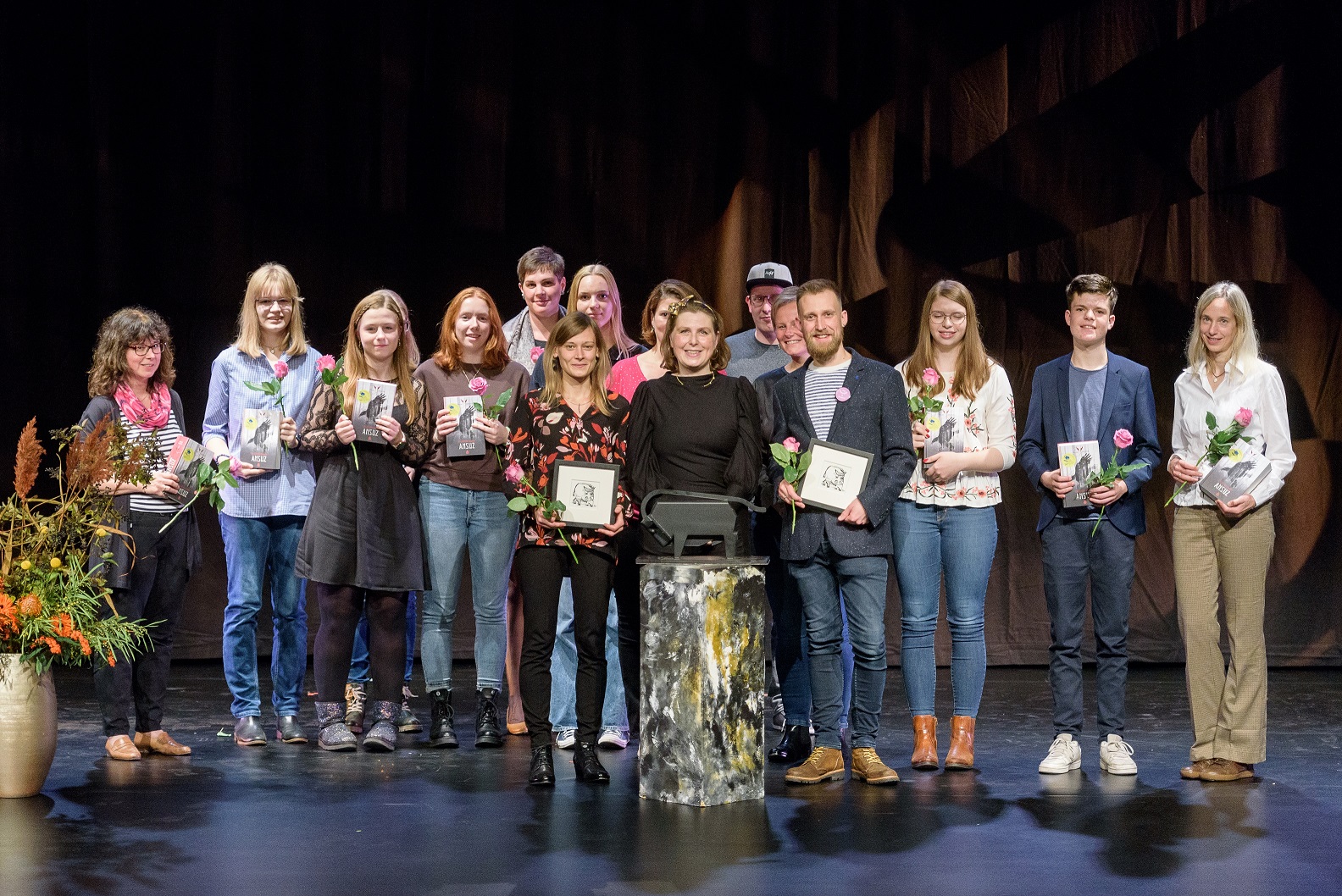